this has been such a great, balanced weekend, full of so many of my fave things: lots of girlfriend time, lots of sleep, lots of running, lots of wine. lots of fun. 🙂

Friday night i went to my friend Frankie’s annual charity Christmas party with some girlfriends. he throws an awesome party at his parents’ restaurant, and all guests are asked to bring a toy, which he then donates to Toys for Tots. such a nice way to celebrate the holiday.

Saturday started off with a pretty great run, despite the whole downpour thing. when i started out it was merely drizzling a bit, but about 3 miles in, the skies opened up and i had my first truly rainy run in a while. the positive side is that it was almost 50 degrees out and not windy, so once i bucked up and resigned myself to the fact that i was going to be a wet dog of a mess, i actually enjoyed myself immensely and had a great run. 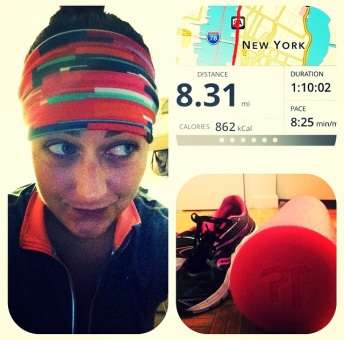 still not sure what i’m going to do when apple cinnamon and pumpkin Chobanis go bye-bye for the season. won’t be my finest hour.

last night was one of the most fun girls’ nights out i’ve had in a long time. we started by going to see Fuerza Bruta’s new show Wayra, which is one of the sickest, dopest, craziest, most insanely amazing shows ever created.

the amazing water girls — aka, what i wish i did with my life

it’s absolutely rad and i don’t even know how to describe it: it’s like this Brazilian interactive experimental music and dance and acrobatic theater party all rolled into one. i’ve seen the original twice but Wayra is their new show, which included some of the original elements, like their famous water ladies (pictured above) and the running-for-his-life treadmill man,

but also added some crazysick new aspects as well, like an inflatable room (!!!) and a man suspended down through a wind tunnel of a tube: 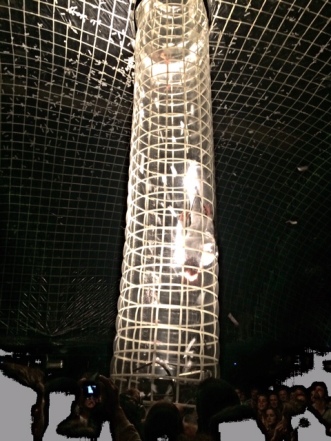 yes, that’s an upside-down man…and we were all in that tent thing

i won’t ruin it for you with a play-by-play and i probably couldn’t do it justice with words if i tried, but i definitely recommend you go see it if you live in NYC or are even here for a few nights. it’s that good. the only bummer for me was that i wasn’t chosen as an audience participant to go swinging into space attached to an actor and get to play atop the inflatable room. sigh. i guess nobody gets it all.

we then traipsed on over to our friend’s holiday party, where we enjoyed wine and girl talk and all things good and silly, before closing out the night at the Jane Hotel. this is one of my very fave bars/clubs/places to have a dance party in the city, and that’s exactly what we went there for. it’s been a minute since i had a good let-loose-and-dance-on-furniture-with-your-girlfriends night out, and this is absolutely encouraged at the Jane. complete success and mission accomplished, and i woke up feeling something like this:

minus the sleep-in-my-party-dress thing. i’m on a mission to locate and purchase those pillow cases asap.

after sleeping til the clock said pm today (whoops), i set out for the windiest, coldest run i’ve had in a long time.

thank God for the sunshine, b/c otherwise this would have just been plain old misery. and yes, i meant to pair those colors together. gives me wings. and that view, right?! here, you need some bigger shots of it:

i feel really blessed to call this my running path.

however, i’m pretty sure my MapMyRun is inaccurate, because although i felt great, i don’t think i nailed that pace. it’s being too generous to me.

but some lies are just oh-so-good and i will happily pretend to believe it anyway. 🙂

so there’s my crazy great weekend, in a nutshell. hope you had fabo weekends yourselves, friends!

Tell me a highlight from one of your S days!
Runners: have any great runs or races to brag about?
Dance-partiers: have any fun nights out this weekend?

*food. you know how sometimes you take a bite of something and it’s exactly what you want, and you suddenly realize it’s your most favorite food ever? okay, so at least at that moment?

that’s what’s happening to me right now with these dried figs from my Nature Box. can’t.get.enough. 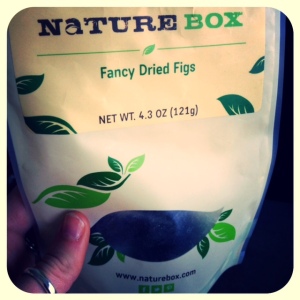 i’ve always been a “fig girl,” as i loved Fig Newtons as a kid and have since then maturely moved on to the actual real fruit, and any sort of fig spread i can get my hands upon. safe to say i’ll definitely be including these in my next Nature Box order.

*out and about. i had lunch yesterday at an absolutely adorable, well-known-for-brunch spot in TriBeCa (for those of you non-NYCers, that stands for “Triangle below Canal St” and is downtown on the west side — we like to label all the pockets of the city here!) called Sarabeth’s.

this place was darling, and i’m surprised it’s taken me this long to eat there. they have live jazz during happy hour on Thursdays, so i’m hoping to make it back for that at some point. the decor was sweet and simple, with a light, airy sort of country vibe, and the service and food were great (i had a salad as usual, so i didn’t think a pic was necessary) — as were the Four Flowers Mimosas.

i found this place entirely charming and cozy, and given that it’s just a short little jaunt from my work, i’m hoping to make my way back there sooner than later.

*workouts. workouts have been consistently good this week, and i managed to get outside for my run this morning, which was wonderfulllll. i’d been nervous about running along the river in the early mornings because of the dark, but at 7am it was light enough for me to feel entirely comfortable. felt sooooo good to be back along this favorite path of mine for the first time in weeks.

this weekend will certainly include some snowboarding and salsa dancing, which are my fave non-running related workouts for suuuuure.

*watching. for a girl who pretty much never watches TV, i sure know how to make an exception: can’t deny that i’m watching the ridiculousness that is The Bachelor. it’s such a wonderful disaster, i can’t stop. a group of us have formed a Monday Night Girls’ Bachelor Crew and are alternating hosting these shin digs, so it’s turned into a fabulous excuse for a fun girls’ night with some lovely ladies. i unfortunately can’t participate in the “choose the winner” pool, as i have zero self-restraint and had to read the spoiler to see who wins this mess. 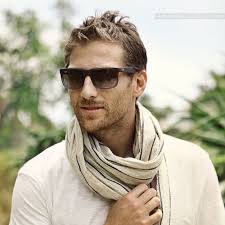 ah, Juan Pablo. yes, he’s adorable, i’ll give him that, even if he “fake” salsa dances and his response to one of the best girls telling him she was a lawyer was a look of shock and a “wow, you read a lot,” from which we can deduce that he, in fact, might not read so much. so not the brightest, perhaps, but somehow i don’t think that’s the top criteria for launching yourself shamelessly onto a reality dating show. fun and beautiful is what we’re going for here, people. the American dream. and yes, i’d probably throw myself into a house of crazy loony chicks and wrestle a few to try to date him, too. don’t judge me.

*inspired.this pic totally inspired me to start doing this on my closet doors: 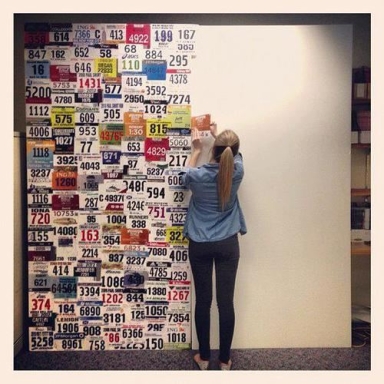 i don’t have quiiiite that many yet (cough) and i didn’t save bibs from a lot of races in years past, but i’m saving them now and hoping to have a nice little collage of my running endeavors to remind me of these accomplishments and motivate me to keep signing up for races.

hope you have a great weekend, friends!

Questions:
Any fave foods at the moment?
TV show addictions?
Do you save any race or fitness memorabilia and display it?